At a recent luncheon, I was sharing my story with the R.N. sitting next to me about caregiving a mother with Alzheimer’s for ten years. A mother who did her best to end her pregnancy with me. And talked about it often. Although Mom would wind up those conversations with the disclaimer that she loved me very much; during her dementia-related rants she would often ask “where is that kid I have to drag around with me?” Which drove home the point that loving someone and wanting them are two totally different things. The nurse told me that I have been walking through a “complicated grief.” Although I am not sure that it’s been a walk. I have been so tired and at times, depressed, that it has felt like a four and a half year shuffle through South Carolina quicksand. Gooey, stinky, messy and with the ability to suck one under and suffocate them. The Bible illustrates times like these as being in the desert. But to me….it’s been quicksand.

For ten years I was my mother’s primary caregiver as the Alzheimer’s I suspected had arrived and became apparent. At first I flew from Virginia to Palm Beach County to oversee her financial situation and help her with doctor’s appointments, house repairs, shopping, etc. That stage lasted approximately six years with the visits becoming more and more frequent to meet her growing needs. This particular stage caused a great deal of financial stress on myself, as well as us as a married couple. I was a self-employed massage therapist at the time and a week off meant a week off without pay. Then there were the plane tickets. And since my mother didn’t have a car, there was the car rental. And the gas. Each trip to Florida cost approximately $1,000 and I made 3-4 trips each year for almost six years. It was at that time I relied solely on the provision of God. Although my husband and I did not “get ahead” during this time, neither did we fall too far behind financially either.

Mom finally reached a stage where living alone was dangerous for her and so I coerced her into moving in with me and my husband in South Carolina. This was the hardest decision I ever made in my life. My mother was a very reluctant mother when I was born. She was planning on divorcing my father and my sister’s constant illnesses had left her weary of motherhood. She simply wanted to be free of childrearing and now she had another on the way. I heard her often discuss this burden of raising me with her girlfriends, and I spent much of my youth wishing that abortion had been an option for her. And for me as well. I felt like an inconvenience to my mother for most of my life and I often yearned to be in heaven instead of in a home where I was superfluous. It was not until I chose to follow Jesus that I became aware of the fact that MY life was precious in His sight and that I had the RIGHT to live! That Jesus died on the Cross for ME because He loved me from before the beginning of time. That He knew my name! It was not my mother’s right to “choose” life for me because my life came from God. Being completely honest, my decision to move her into our home was because I was commanded by God and committed to God to honor my mother. It was done with a sense of duty and not because I was this wonderfully unselfish and loving woman.

During that two and a half years that Mom lived in our home, the disease relentlessly marched on. At first she left on faucets and forgot her coffee in the microwave. She would take a decorative small broom and chase the cat because the cat “needed discipline.” Then she progressed into telling the same story over and over and over again. She forgot how to use dining utensils and often ate with her hands. She would go into the bathroom and forget to sit on the toilet, leaving me with a clean-up of my worst nightmares. She morphed from taking great pride in her appearance to refusing to bathe or shower. She would hide her evening medications and take them in the morning with her morning meds; rendering her a babbling mess for the day. She would be found wandering in our backyard looking for the “little lost dog” which was her family dog that had died 75 years before. But then the evening came where she forgot who I was--forever. And, going forward from that night…I changed from her youngest daughter to a villain who had kidnapped her daughter, was stealing her money and was trying to take away her husband. It was during the six months after she forgot who I was that suicide and even sometimes, murder/suicide often became prevalent thoughts that haunted me. I was beyond exhausted and broken in a way that I could not imagine a road back to wholeness. People around me did not understand the range of emotions I was dealing with on a daily basis. I was learning how judgmental people could be who had not walked in my situation. It was during this time that I vowed to learn to be a “listener” for those who needed a friend and not just someone who wanted to “fix” people’s problems.

It wasn’t until Mom attempted to throw herself out of my car on the highway because I had “given Sandi to the gypsies” that I decided that placement in a memory care unit was the last and only option left to me. Before she caused harm to herself, to me or to someone else. Or if I got to a point where I might harm her, myself, or both of us. There was no other option by this time.

She lived in a memory care unit for eighteen months before falling and breaking her hip and dying of complications nine days later. It truly was her time to go home. All of her siblings, aunts, uncles, parents and all but one friend had passed away. She was lonely and she didn’t know her own children. She died a beautiful and peaceful death with me and my husband by her side and a priest giving her last rites. I took her home to Pittsburgh and laid her ashes to rest in her mother’s grave near her father and her siblings. As I stood in the midst of a swirling snow shower at the hilly cemetery overlooking the Monongahela River, I knew then that she was “home” in every respect of the word. And it was there and then that I truly understood the “peace that passes all understanding.”

Nine months after my mother’s passing, my sister lost her battle with alcoholism, leaving me once again trying to navigate a “complicated grief.” Within four and a half years after their deaths we saw my husband through his treatment for prostate cancer and me through my treatment of ocular lymphoma. I had a bowel resection for Crohn’s and my gall bladder removed a few months later. The reprieve into semi-retirement and fun we had hoped for was not yet happening. But during this time, I began to write a book. And the day before I had eye surgery for ocular lymphoma, I sent the book to the publisher.

“Dear Clueless: A Daughter’s Journey Through Alzheimer’s Caregiving” is the story of me and my mother. Caregiving a parent with dementia creates such a shift in the relationship and so much heartbreak and stress that only a book could portray what it is like. But caregiving a parent who never wanted you is a challenge that creates even more stress and leaves the caregiver bogged down with everything from relief to overwhelming guilt when it is all over. As I began to write the book, my time of grief was drawing to an end. I had switched gears to a gentle sadness and forgiveness of my mother’s feelings and problems and the realization that I had never walked in her shoes. I am sure there were reasons behind her problems and dysfunctions that I am completely unaware of. And it was during this time that I fully realized that God is the only perfect parent that exists. None other. I also realized that possibly I was born for “such a time as this.” Because a complicated woman would one day need someone to protect her, love her, watch over her and care for her until her dying day.

The book is for sale on Amazon and Kindle, Barnes & Noble and Nook and also Books-A-Million. I am not using this wonderfully inspirational website to “sell” the book as it is selling at a satisfactory pace. But I know the pain of caregiving and watching someone you love disappear into a fog that never seems to lift. I have been told by dozens of people that the book has helped them immensely and so I want to humbly recommend it for someone who may be facing caregiving, who are in the middle of the battle, or who are walking their own path of grief at the end of it.

The book is not only the story of a mother and daughter, but it is filled with caregiving tips and directions for help resources.

God bless you, the Caregiver.

“Let us not become weary in doing good, for at the proper time we will reap a harvest if we do not give up.” Galatians 6:9

Postscript. I have known Sandi since the early nineties, was her Maid of Honor at her wedding. I was also a willing subject when she was in Massage School! In all of the things she has experienced I have never seen her without her sense of humor intact. We were not in the same area of the country when she was going through the process described above and the book has helped me to see deeper into one I love. I recommend the book for the story itself as well as for the help it offers. The Editor 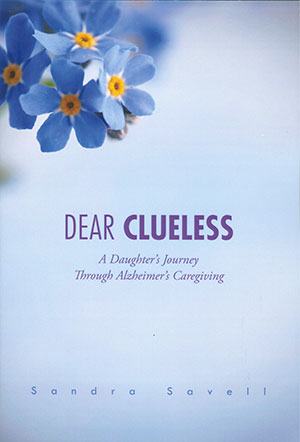